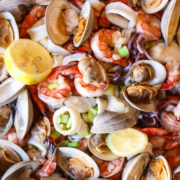 Seafood Salad With Garlic And Oil